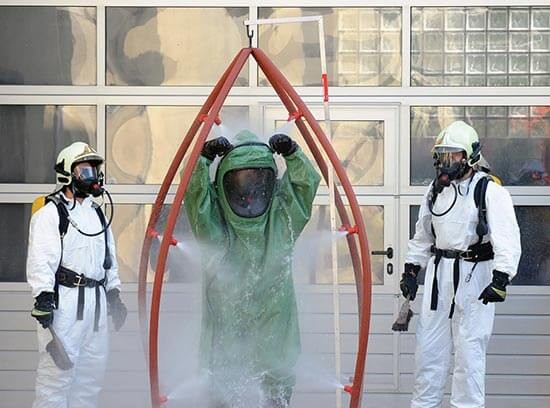 OSHA developed its Hazardous Waste Operations and Emergency Response (HAZWOPER) Standard to protect workers in hazardous waste cleanup and emergency response operations. As part of the standard, initial and annual refresher training is required based on the role of each worker. Look to J. J. Keller to help you train your hazardous waste cleanup workers and emergency responders.

Choose from a wide variety of curriculums and courses, including:

In OSHA’s view, computer- or online-based training, by itself, is not sufficient to meet the intent of the agency’s training requirements for HAZWOPER, 29 CFR 1910.120 for general industry or 29 CFR 1926.65 for construction. Therefore, computer or online training, in the case of HAZWOPER, must be supplemented by site-specific elements, hands-on training and exercises, and an opportunity for trainees to ask questions of a qualified trainer. We recommend that employers who use computer- or online-based training as a tool to help with training under §1910.120 or §1926.65 also:

The Emergency Response Guidebook (or ERG) is an element of HAZWOPER emergency response training.

OSHA 29 CFR 1910.120(q)(6) calls for HAZWOPER emergency responders to demonstrate competency in using the DOT’s Emergency Response Guidebook (or ERG). Containers of hazardous substances will often display DOT markings, labels, and/or placards. Knowing how to use the ERG to identify the potential hazards and emergency procedures, based on those markings, labels, and/or placards, is an important step in emergency response.

What does HAZWOPER stand for?

The abbreviation HAZWOPER is short for “Hazardous Waste Operations and Emergency Response.” HAZWOPER is pronounced “haz-wop-er.”

The Hazardous Waste Operations and Emergency Response (or HAZWOPER) Standards are intended to protect workers from exposures to hazardous substances when they work in any one or more of three types of operations:

The HAZWOPER Standards were not OSHA’s idea. The standards were mandated by a law signed by President Reagan. The Superfund Amendments and Reauthorization Act (SARA) of 1986 was prompted after it was discovered that efforts to clean up abandoned hazardous waste sites created significant risk to the safety and health of workers in these operations.

Where are the HAZWOPER standards or regulations?

The Hazardous Waste Operations and Emergency Response (or HAZWOPER) Standards relate to:

What are the OSHA HAZWOPER protections for workers?

The standards require a covered employer to offer the following worker protections, depending on which operation(s) is at the site:

Procedures for introduction of effective new technologies and equipment.

What is HAZWOPER training, also known as HAZWOPER certification?

In most cases, the phrase Hazardous Waste Operations and Emergency Response (or HAZWOPER) training or certification is referring to OSHA 40-hour HAZWOPER training. This initial training requirement is mandated at 29 CFR 1910.120(e)(3)(i) for general site workers (such as equipment operators, general laborers, and supervisory personnel) at hazardous waste cleanup sites. These employees are engaged in hazardous substance removal or other activities which expose or potentially expose them to hazardous substances and health hazards. Upon successful 40-hour training and 3 days of field experience, the instructor and supervisor must certify the training of the employee.

What are the OSHA HAZWOPER training levels?

Depending on the site operation and employee duties or roles at the site, OSHA’s HAZWOPER training levels include the following:

What is the difference between an incidental spill and an emergency release?

An “incidental spill or release” has occurred when the release of a hazardous substance can be absorbed, neutralized, or controlled at the time by trained employees in the immediate area or by maintenance personnel. This type of release does not pose a significant threat to the health and safety of employees in the immediate vicinity or to the employees cleaning it up, and it does not have the potential to become an emergency within a short period. Before handling an incidental release, the employee must be trained on hazard communication, personal protective equipment (PPE), and other applicable OSHA regulations.

Factors to keep in mind when determining if a release is incidental include:

An “emergency release,” on the other hand, has occurred when the release of a hazardous substance cannot be absorbed, neutralized, or controlled at the time by trained employees in the immediate area or by maintenance personnel. This type of release is uncontrolled or likely to result in an uncontrolled release, and properly trained employees from outside the immediate area or designated responders are needed to handle the release. An emergency release poses a significant threat to the health and safety of employees. Before handling an emergency release, employees or designated responders must have emergency response training or sufficient experience, in accordance with OSHA’s HAZWOPER Standards.

Some situations that would normally be considered an emergency release include:

The distinction between incidental and emergency releases is facility-specific and is a function of the emergency response plan.

What if annual HAZWOPER refresher training has lapsed?

Base this determination on your employee's familiarity with onsite safety and health procedures and individual retention of information. This is a case-by-case decision. The agency offers no time frame within which it would be necessary to repeat initial training.

It should be noted that:

"Because of the J. J. Keller online training the improvement that we're seeing with the trainee is phenomenal. They seem to be much more educated from day one when they hit the dock."

Additional Industries That May Interest You

With a J. J. Keller® Training account you can preview programs for free, browse our course library, purchase training points, enroll learners, use our free recordkeeping tool, and more!