Employers could be liable for active shooter violence

Suits against employers of violent individuals on the rise

If it seems like active shootings are happening more frequently, that’s because they are. The Federal Bureau of Investigation (FBI) identified 250 active shooter incidents between 2000 and 2017, with 50 happening between 2016-2017 alone. The agency recorded 30 such events in 2017, the highest year on record.

While the FBI reports that nearly half (42 percent) of the incidents between 2000 and 2017 took place at businesses or areas of commerce, that number is actually much higher. Most of the locations categorized as non-commerce, such as education, health care, and places of worship, are also places of employment. Through this lens, more than 80 percent of active shootings happened in places of employment.

Section 5 of the Occupational Safety and Health Act states that employers are required to furnish workplaces “free from recognized hazards that are causing or are likely to cause death or serious physical harm.” In other words, employers have a duty to keep their employees safe from identifiable harm.

With the rise of workplace shootings in recent years, this kind of violence is beginning to be considered a “recognized hazard,” and employers have faced increased legal action following such incidents.

For instance, in 2017, an employee was allowed to enter the distribution facility where he worked despite setting off metal detectors at the entrance. He then shot five coworkers, three of whom died, before killing himself. The company in question now faces lawsuits from families of those who were shot, as well as employees who were injured trying to escape.

Though the likelihood of a workplace shooting is low, employers must be prepared to protect their employees should it happen. Just as you prepare your employees to respond to other devastating events with drills, such as fires or tornadoes, you should teach them how to react in the face of workplace violence using an active shooter drill. The more they practice, the less likely they will be to freeze up in the event that the unthinkable happens.

Drills help workplaces prepare for emergencies. When the drills aren’t managed correctly, however, they can do much more harm than good — especially in the case of active shooter drills.

In December, two such instances caused chaos at a Maryland military hospital and a Florida high school. At the hospital, staff began receiving notifications via email and other alert systems that an active shooter was present. At the high school, a voice over the loudspeaker announced a “code red,” the school’s code for an active shooter.

In both cases, the warnings came with distinct “not-a-drill” messaging that sent staff, visitors, patients, teachers, and students into a panic as they tried to escape or find safety. Several students at the high school reported suffering panic attacks and minor injuries in the chaos.

After inevitable investigations, the hospital’s staff admitted to accidentally triggering the alert system, while the school’s administration maintained that the drill had been executed correctly and blamed students for overreacting (though the county sheriff has suspended all unannounced drills until further notice).

Drills are a necessary and effective approach to preparing for the unexpected, but they should be conducted in an orderly manner with plenty of notice.

This article was written by Ann Potratz of J. J. Keller & Associates, Inc. 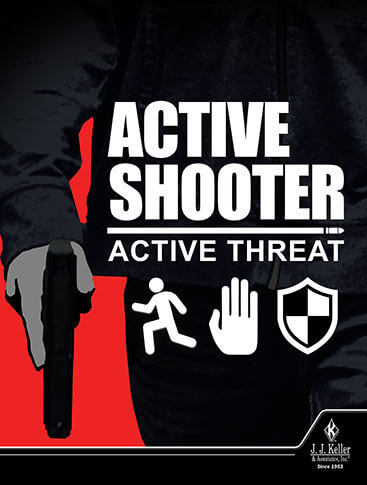 J. J. Keller's Active Shooter/Active Threat training helps employees learn how to recognize an active threat and respond appropriately during and after a situation.